Plastics and their pollutive consequences have recently garnered a huge amount of media attention – and with good reason. Since its foray into mainstream use in the 1950s, global plastic consumption has expanded at a rate far exceeding our ability to effectively manage the waste it produces. This is now a major environmental issue. Plastic consumption has risen to the same inauspicious level as climate change when discussing the world’s most pressing ecological concerns. 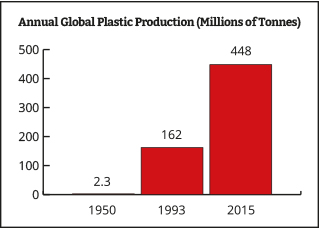 The figures surrounding issue of plastic are staggering. Recent estimates put the amount of plastic currently residing in our oceans at 250,000 tonnes – consisting of 5 trillion individual pieces 1. Exacerbating the problem is the fact that most estimates regarding the length of time it takes plastic to biodegrade start at 450 years 2. This means that if Sir Francis Drake had tossed a plastic bottle overboard whilst circumnavigating the globe in 1580, it’s likely that bottle would still be afloat today.

Where is the problem most obvious? Thanks to prevailing currents, ocean-borne plastics are largely concentrated in five zones known as gyres. The largest of these, located off the West coast of the US, is known as the ‘Great Pacific Garbage Patch’ and is roughly the size of Texas 3. One example of where the effect of oceanic plastic waste is being profoundly-felt is in nearby Hawaii. National Geographic has highlighted one study which estimated that up to 15% of the sand on the beaches Hawaii’s Big Island is not actually sand – but rather microplastics (pieces smaller than one-fifth of an inch across).

In a UK context, the picture is not much brighter. A key issue in the UK and other developed nations is the fact that not all plastic is recyclable. For example, ‘thermosetting’ plastics such as electrical sockets, burn when heated and therefore cannot be recycled. On the other hand, ‘thermoplastics’ such as bottles of water, melt when heated and are therefore recyclable. A further issue resides in the fact that many local authorities in the UK will not recycle certain types of plastic if a follow-on buyer for that plastic cannot be secured. An example would be plastic tubs such as those used for creams and yogurts. Approximately 25% of UK councils do not accept these for recycling 4. Cling film is another example, with only 20% of local authorities accepting it for recycling as it tends to be contaminated with food particles which attract pests. It can also cause issues for automatic sorting machines 5. The unnecessary use of plastic products is also a major factor impacting the issue. A flagrant example of this here in the UK? Plastic-wrapped coconuts which can be found in supermarkets Waitrose, Marks and Spencer and Ocado 6. 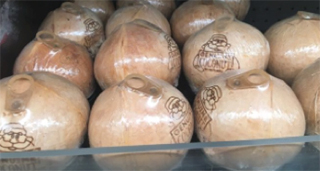 At present, from a regional perspective the largest contributor in terms of plastics use and follow-on pollution is Asia. As Asian economies have developed and consumers have become wealthier over recent years, the use of plastics has grown exponentially, and so too has the waste it produces. Half of the world’s mismanaged plastic waste is generated by just five countries – all of them Asian: China, Indonesia, Vietnam, Sri Lanka and The Philippines 7. The major issue in Asia is that countries simply do not have sufficient waste management infrastructures in place to cope with the increase in plastic usage. Interestingly – and somewhat disturbingly – the UK has exported millions of tonnes of plastic waste to China in recent years. Data compiled by Greenpeace show that since 2012, 2.7m tonnes of UK waste has been shipped to China and Hong Kong 8. However, in January 2018 China imposed major restrictions on the amount of plastic waste it will allow into the country, which could have serious negative implications for UK recycling and waste management facilities. 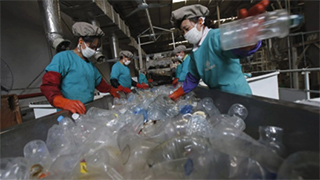 Most of our clients will no doubt be familiar with the fact that Holden and Partners specialises in Ethical, Sustainable and Thematic (EST) investment management. It follows then that the issue of plastics is one which we have followed closely. Encouragingly, many of our core EST funds have taken action against the plastics epidemic and in fact see investment opportunities in the solution(s) to the problem. We have provided some salient – though by no means exhaustive – examples below.

Solution Offered:
Suez provides multi-faceted waste management systems as well as producing greener alternatives to traditional plastics. They have developed a recycled plastic for industrial use which is of equivalent quality to ‘virgin’ plastic – reducing the ecological footprint left by associated firms.

Solution Offered:
Xylem is a water treatment company. Through advanced technologies, they have developed systems which can remove plastic particles and treat chemical breakdowns from plastics in drinking and wastewater treatment processes.

Solution Offered:
Based in Norway, Tomra has pioneered a material recovery solution referred to as the ‘reverse vending machine’. Consumers return plastic items such as water bottles to these machines for a small amount of cash. The company has also developed innovative solutions to automated recycling, providing waste management facilities with greater accuracy in detection and separation of different materials – allowing for a vastly improved recycling process.

Solution Offered:
Primarily involved in the production of cosmetics, Natura offers 100% carbon-neutral products. Plastics used in certain Natura ranges are derived not from petrochemicals but instead from sugar cane – making it biodegradable. The company also offers refills on certain skincare products, further reducing their environmental impact.

An additional theme which a selection of our EST fund managers are engaged in is that of forestry – more specifically, the use of timber products as an alternative to plastics. This may seem somewhat counterintuitive at first glance as of course the use of timber products can, in some cases, lead to harmful deforestation. However, the use of wood products from sustainable farming methods offers significant environmental advantages in comparison to the use of plastics. These farming methods also mean that timber has the potential to be a highly-renewable resource. For example, in addition to being biodegradable, many products made from timber are less carbon-intensive to produce and indeed to recycle than plastic equivalents.9

In relation to funds held within Holden and Partners client portfolios which invest in forestry as a theme, the aforementioned Pictet Global Environmental Opportunities fund holds a position in Mondi PLC, a UK-based pulp-and-paper producer engaged in sustainable forestry practices.

Though alarming in magnitude, there are positive developments currently underway whereby countries are taking action to reduce plastic waste. Readers will be well-versed in the UK government’s 2015 decision to levy a 5p charge on all single-use plastic carrier bags. Turning to the continent, Germany has a deposit-and-return scheme in place which was launched in 2003 and has led to an increase in the recycling of refillable plastic bottles by 98.5%.10 Heading further afield, Kenya is arguably most deserving of praise; having imposed an outright ban on the use and domestic production of plastic bags. Penalties for infringement include fines of up to $38,000 and 4 years’ jail time.11

It is encouraging to see that solutions to mankind’s addiction to plastic are gradually emerging. Some of these will be born out of a change in consumer habits, whilst others will come through new technologies and innovations. Holden and Partners will continue to support funds which place environmental impact at the heart of their investment approach. Our belief has always been that this path will benefit both our clients and planet over the longer term.