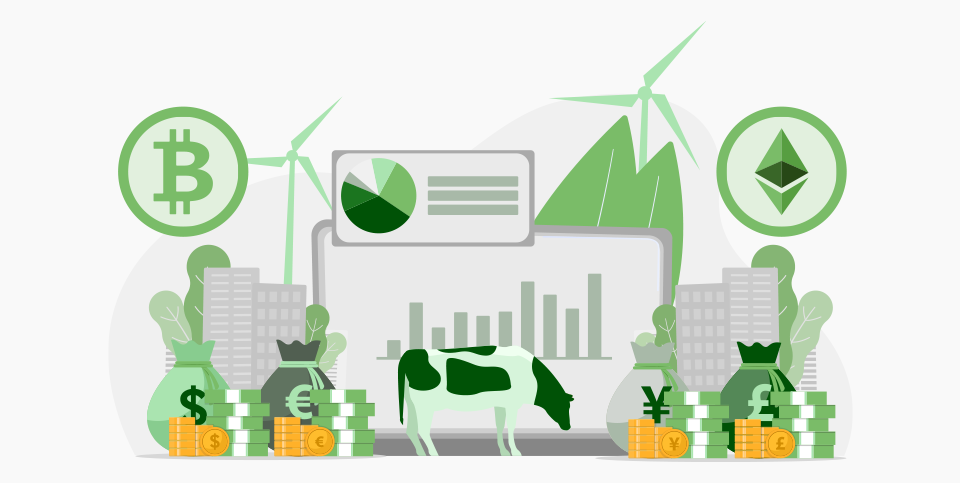 We know what you do with your cash counts, but have you ever wondered about the money itself? From pounds and pence, to cryptocurrency – what is the ecological impact of money?

Economics is one of the main drivers of environmental degradation. After all, most processes, industries and consumption can have a negative impact, requiring resources, energy and creating waste. If you care about ethics and the environment, you have probably given considerable thought about how you invest your money. At Holden & Partners we’ve helped large numbers of people make careful choices that reflect their beliefs, whether that involves avoiding oil, arms manufacture, tobacco and animal testing, or supporting sustainable development goals such as climate action.

Where you put your money is powerful, but have you ever considered the greenness of money itself?

Since roughly 700 BC, coins have been the most universal embodiment of worth or money. The first coins were made of electrum, a naturally occurring mix of gold and silver, alloyed with silver and copper. The substance itself was considered precious, and intrinsically valuable. 1

The cash in your pocket

Today, money designed for circulation coinage is not in itself valuable since it is made of more common metals. In the UK, this includes copper, nickel, mild steel (which comprises iron, carbon and manganese). The mining and processing of finite resources such as copper has a significant environmental impact, which can result in localised pollution, waste issues and land degradation. 2

Most banknotes today are made from plastic polymer, rather than the traditional paper, and have had their share of ethical issues for containing animal derivatives. 3  Whilst plastic is linked to waste and disposal problems, notes are clearly not treated as disposable items and the polymer options last much longer without needing replacement.

Interestingly, only 23% of all payments in 2019 were cash transactions, a figure that is only likely to have dropped following Covid-19. 4 The shift towards cards, phones and watches reduces the need for physical cash in circulation.

Is cryptocurrency an ecological option?

You might think cryptocurrency, such as Bitcoin or Ether, would be of no environmental concern. It’s virtual, right? No need for metals, no processing, no physical distribution issues, so surely that should mean zero carbon footprint.

Actually, Bitcoin and similar currencies come with surprisingly high energy use and associated emissions. The total energy consumed by the Bitcoin mining process is predicted to reach 128 terawatt-hours this year, which is 0.6 percent of the world’s total electricity production. That’s more than the entire energy use of Norway. 5  This is because Bitcoin is ‘mined’, not physically like gold, but rather by sophisticated computers solving extremely complex computational maths problems – and this takes lots of electricity. They are known as ‘proof-of-work’ currencies. It even means that individuals can use their own devices and power to ‘mine’ Bitcoins although at a tiny scale. 6

If the energy used was from renewable sources, this would be less of a concern, but most of Bitcoin’s miners are based in China, where over two thirds of the power is fossil fuel based. It’s for this reason that Tesla boss Elon Musk has recently announced they would no longer accept Bitcoin, because of the “insane” energy use. 7

There is an opportunity for change, however, because Bitcoin miners will go wherever energy is cheapest. This means that increases in renewables could cause a shift. 8 In fact, a brilliant example of this burgeoning change is the new cryptocurrency ‘farm’ in the UK, where cow poo fuels an anaerobic digester to power computers ‘mining’ for the cryptocurrency Ethereum. 9 Yet it remains an energy hungry process– wherever the power comes from.

Other alternative cryptocurrencies aim to address this. Cardano wants to reduce the power required for the underpinning technology and is described as being four million times more energy efficient than Bitcoin. Cardano’s value is based on how many coins are held by a network, rather than the amount of computer processing power they possess. It is predicted that unless Bitcoin can speedily transition to renewables, then investors and consumers will turn to greener cryptocurrencies. 10

Cryptocurrencies have received necessary scrutiny for being energy intensive but let us not forget that the banking system that supports traditional currencies is also a user of energy. Galaxy Digital claims that the overall banking system uses twice the electricity of Bitcoin. This does not exonerate Bitcoin – after all the Bitcoin network is miniscule compared to the whole banking system – but it does show how we can ignore the energy use implicit in common structures and highlight those inherent in newer approaches. 11

Bitcoin and similar cryptos have a poor reputation. They tend to get associated with dark markets and illegal practices and are supposedly the currency of choice for shady deals. However, most people who own Bitcoin use it legally and mainstream currencies, such as the US dollar and British pound are used for illegal means far more than Bitcoin is. 12

Crypto currency will no doubt clean up its environmental credentials and maybe it is also time we examine the sustainability of wider banking systems. At Holden & Partners, we are proud to be a B-Corp, independently evaluated against high global standards of social and environmental performance. 13 We’re leading the way – one of only a few independent financial adviser firms to have achieved Chartered Insurance Institute’s Corporate Chartered status and B Corp accreditation.

We believe if you have the opportunity to do good with your money, it should be taken. From each choice to buy from a local, independent shop, to supporting Sustainable Investment Portfolios, such as ours which invests in the Ninety One Global Environment Fund, working to a transition to a decarbonised economy. We can build a greener, healthier and more ethical future, to benefit not just ourselves, but future generations too.

We’re excited to be making it easier for our clients to feel confident that in building personal wealth, they are part of a sustainable future.

The value of investments can fall as well as rise. You may not get back what you invest.

Past performance is not a reliable indicator of future results.

4 Cash in the time of Covid | Bank of England

5 Bitcoin Consumes More Electricity Than Most Countries in The World. Here’s Why (sciencealert.com)

8 Bitcoin no longer accepted at Elon Musk’s Tesla: How bad is mining the cryptocurrency for the environment? | The Independent

10 How bad is bitcoin mining for the environment really? (msn.com)

12 Buy Bitcoin UK. How to easily invest in Bitcoin in the UK – stedavies.com