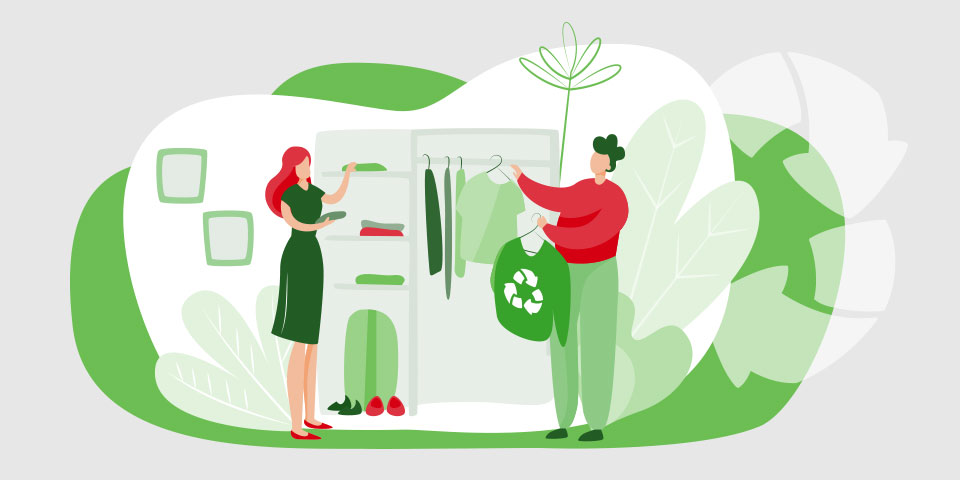 “Every single second, the equivalent of one rubbish truck of textiles is sent to landfill or burnt. The fashion industry accounts for more than a third of ocean microplastics, while textile dyeing is the second largest polluter of clean water globally. If nothing changes, by 2050 the fashion industry will be using up to a quarter of the world’s carbon budget.”1

The fashion industry is one of the most polluting, unethical, and least sustainable industries on the planet. It’s not just the profligate use of carbon, water and the resulting pollution, but the treatment of people that often goes hand-in-hand with cheap production in developing countries.

Few can forget the collapse of Rana Plaza garment factory in Bangladesh in 2013, leaving over 1100 dead and another 2,500 injured. The factory was supplying high street brands such as H&M, Mango and Primark. Cracks in the building had been reported but ignored.2

Of course, from an environmental perspective, it is not just how clothes are made, but what we do with them that matters. Fashion is a high volume industry and that is because many people treat clothes as disposable items – to be worn once or twice for a season and then discarded into landfill.

Some blame this trend on online influencers, showing off their “#gifted” outfits on Instagram then never wearing them again. Yet it is part of a wider societal shift too – items such as electrical goods are often cheaper to replace than repair, and smart gadgets soon become obsolete even if they still work. We have become accustomed to disposal and novelty.

Yet the tide is turning. A few years ago, sustainable fashion was barely discussed. Then came the vanguard; individuals with influence such as Stella McCartney and Livia Firth, the UN Leader of Change, who, amongst much awareness raising, created the Green Carpet Challenge so celebrities could show off the glamorous side of eco.3

Fashion Revolution4, an organisation advocating fashion activism, has produced a wall planner of 366 acts of fashion activism and their white paper on sustainable fashion was put to Government.

Campaigning by organisations such as Greenpeace, and the influential Netflix film, The True Cost, have further highlighted the issues, which reached mainstream with Stacey Dooley’s documentary for the BBC, Fashion’s Dirty Secrets5. The book, How to Break Up with Fast Fashion, by Lauren Bravo will be published in January 2020.

But is this noise and attention leading to real change from brands and consumers?

Many major retailers, including Next, Ted Baker and M&S have signed up to the Sustainable Clothing Action Plan, backed by the Government. This provides advice on many areas across production, including guidance on how to make longer lasting clothes – if items could last just three months longer, it would cut 3% of the carbon, water and waste impact across the supply chain.6

Companies who have signed up commit to reducing waste sent to landfill, water and carbon use by 15% by 2020.

Some organisations are going further. This summer, Inditex, the owner of high street fashion chain Zara, announced that all of its brands will use 100% sustainable fabrics before 2025. Inditex has also installed clothes banks in many stores, collecting more than 34,000 tonnes of used clothes since 2015.7

This is progress, but it requires voluntary participation in schemes, instead of industry-wide legislation that the Government has so far rejected. For example, the Environmental Audit Committee recently suggested measures that would tackle issues such as forced labour, environmental damage, and waste in the fast fashion industry – yet these were rejected by Government.8

In 2018, a third of consumers bought clothing once a month, down from 37% in 2016, while those buying every two or three months or less rose from 64% to 67%, according to the market research firm Mintel. This small reduction in purchasing could hail greater change on the horizon.

However, it is not just about how much and how frequently clothes are bought. A third of a garment’s carbon footprint is down to the consumer. How much we wash it, how long it lasts, and what we do with it when we don’t want it anymore really matters.9

Clothes donations have increased in recent years, meaning that the options in charity shops have grown for those not wishing to buy new.10 Similarly, the eBay model has long been popular, but more sites such as Depop11 are being used to buy and sell clothes. It is becoming more mainstream to repurpose, buy and sell second-hand or vintage.

Renting has long been popular for men’s formal wear, but women are catching on too with frock rental, from companies such as Girl Meets Dress. Retailers are also struggling with a less ethical approach from consumers, known as wardrobing, whereby it is reported that as many as one in five people buy items, wear them once and return them to the shop.12

Investors wishing to support fashion’s shift away from fast and towards ethical therefore have a myriad of opportunities. Not only can they become more responsible consumers by giving greater consideration to the products they buy and where they buy them from, they can hold companies to account on their management of supply chains through engagement, as well as committing capital to aid the adoption of more sustainable materials.

In the pursuit of improving the industry’s environmental footprint, several funds held within the Holden & Partners EST (ethical, sustainable, and thematic) portfolios are investing in these areas, whilst encouraging incumbents to reconsider their production and business practices to reduce impact. Austrian producer Lenzing, the world’s market leader in the transition from traditional viscose to cellulose fibre, is one example of those adapting to the need for more innovative fabrics. Materials are only part of the solution though, as many are still water-intensive to create and contribute to plastic pollution when recycled, so production methods also need to be addressed. Kornit, which designs and manufactures digital printers, enables companies to use a water and waste-free process to produce textiles, allowing them to meet demand in a more efficient, lost-cost, and environmentally friendly manner.

The sector has a long way to go, but consumers must take their share of responsibility. Halving the eco-cost of production achieves nothing if output is doubled. Washing clothes less, repairing them, buying quality items that last and not slavishly following trends needs to become the fashionable way forward.

Content of the articles featured in this publication is for your general information and use only and is not intended to address your particular requirements. They should not be relied upon in their entirety and shall not be deemed to be, or constitute, advice. Although endeavours have been made to provide accurate and timely information, there can be no guarantee that such information is accurate as of the date it is received or that it will continue to be accurate in the future. No individual or company should act upon such information without receiving appropriate professional advice after a thorough examination of their particular situation. We cannot accept responsibility for any loss as a result of acts or omissions taken in respect of any articles. Thresholds, percentage rates and tax legislation may change in subsequent finance acts.