So have you survived? Alongside an alcohol-free ‘dry January’ there has been a trend for ‘Veganuary’ – that’s giving up animal products for the first month of the year. Plant-based diets have been growing in popularity, with the rise of social media stars such as Ella Mills of Deliciously Ella, but also mainstream chefs, like Jamie Oliver, now regularly creating vegan recipes. 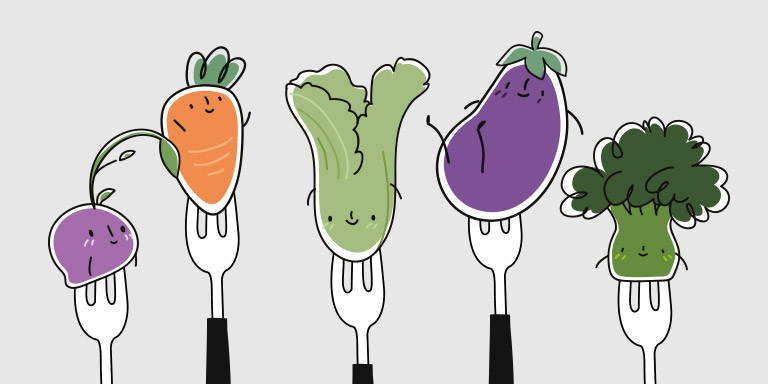 Such is the momentum, that animal rights organisation Peta1 has even suggested we ditch ‘animal hating’ vocabulary such as ‘kill two birds with one stone’ in favour of kinder alternatives such as ‘feed two birds with one scone’.Since 2013, the UK meat-free foods market has increased by 22%, to £740 million last year and Mintel research2 found that whilst 90% of Brits do eat meat, 34% of meat-eaters reduced their consumption in 2018.This shift has been driven largely by health concerns linked to consuming animal products, as well as animal welfare issues. However, there has also been a rising awareness of the environmental concerns linked to the production of red meat and dairy.

The livestock sector contributes 14.5% of global greenhouse gases, including a high proportion of methane and nitrous oxide3, which are many times more potent than carbon dioxide. An Oxford University led study4 in 2014 concluded that a meat-rich diet is responsible for over twice the emissions caused by a plant-based diet, with beef as the most polluting food, globally.

Red meat production is inefficient on two levels. Firstly, livestock requires 100g of vegetable protein to produce only 15g of edible animal protein5, and secondly, it takes a huge footprint, providing just 18% of calories6 consumed globally but using over 80% of farmland. Cattle-farming has also been cited as one of the major drivers of deforestation of tropical rainforests. This leads to losses of biodiversity as well as increasing the carbon in the atmosphere, due to the release of carbon dioxide stored in trees and soils.

Add in a growing population, with increasing food requirements, and the fact that economic development leads to increased meat consumption, and the impact on climate change is alarming. Recent headlines7 have included ‘Huge reduction in meat-eating ‘essential’ to avoid climate breakdown.’

It is important to note that the figures concerning meat are global and based largely on the conventional, mass-production approach. Sustainably managed, grass-fed, organic livestock is entirely different, bringing many environmental benefits. In fact, this type of farming can play a key role in carbon sequestration, that is, the capture and storage of carbon from the environment. This is due to the way it improves soil quality, reducing erosion and increasing the topsoil, thus capturing carbon in the soil as a carbon sink8.

Meanwhile, sensitive grazing from livestock is also a key part of managing habitats for biodiversity. Cattle and sheep are frequently used in national parks and nature reserves to enhance habitats. If over-grazing is avoided, pastures can become rich and diverse ecosystems.

Nevertheless, it’s no wonder the spotlight is falling on alternatives to red meat. Meat replacements, such as vege-mince or Quorn, have been around for decades, and the vegan burger, which ‘bleeds’ on cutting is a recent development. These plant-based options rely on alternative proteins to meat, such as soya or mushroom, and are often highly processed.

More simple vegetarian staples, such as pulses and grains are not without their issues. Most must be imported from India and South America bringing with them a carbon footprint. In some cases, the popularity of certain foodstuffs has caused issues for local populations. For example, the demand for the oh-so-Instagrammable avocado has been blamed for excessive water use in Chile, resulting in villagers being plagued by drought9.

Yet what about synthetic or cultured meat, grown in a laboratory? The first lab-created beef, the so-called Google burger, was created in 2013. The project cost £215,000 and was funded by Google co-founder Sergey Brin. It involved culturing the stem cells from bovine muscle tissue with growth promoting chemicals from cow foetuses and antibiotics, so that they develop and multiply.

In the short time since that first cultured burger was developed, scalability has increased whilst the cost has dropped dramatically. Companies such as Memphis Meats (funded by Microsoft’s Bill Gates and Virgin’s Richard Branson) and Mosa Meat (behind the Google burger) are working to make the product widely available. European based Mosa Meat has recently secured €7.5M to bring cultured meat to market by 2021 – in collaboration with M Ventures and Bell Food Group.

As Richard Branson says on his Virgin blog10, “I think that in the future clean and plant-based meat will become the norm, and in 30 years it is unlikely animals will need to be killed for food anymore. It’s no surprise that the meat and dairy substitutes industry is predicted to be worth $40 billion by 2020.”

The journal Environmental Science and Technology11 reports that, in comparison with conventionally produced European meat, cultured meat reduces greenhouse gas emissions by 78- 96%, land use by 99%, and requires 82-96% less water (figures vary depending on the species of livestock compared). It must be pointed out that these figures relate to conventional, mass-produced meat, rather than the more environmentally sensitive grass-fed livestock, as previously discussed.

Over recent years, Holden & Partners have been aware of the environmental and demographic challenges that have arisen due to global population growth as well as increasing demand for meat products. That’s why related issues such as climate change, water management, nutrition and sustainable agriculture are key themes within our Ethical, Sustainable and Thematic (EST) portfolios.

We have companies in our portfolios which are engaged in tackling the eco-issues affecting agriculture. For example, Xylem, a provider of water technology with a specialisation in precision irrigation, enables farmers to use water more. Also, Vitasoy, an 80-year old, family owned Hong Kong based company produces meat alternatives, such as soy and tofu, with a strong focus on sustainability. The stock is the top holding within the Pacific Assets Trust, one of our Emerging Market equity holdings within EST investment strategies.

At present, the investible universe for companies specifically involved in the development and provision of synthetic meat alternatives is sparse. As a point of reference, both the aforementioned companies – Memphis Meats and Mosa – are privately owned and are therefore not publicly traded. We will, however, continue to engage with our fund managers to encourage investment into this area as the market matures. Our aim is to promote the advancement and incorporation of these technologies, in an effort to stem the threat of environmental degradation brought on by the recent growth trend that has emerged in conventional meat production.

It is clear that feeding a growing population in a sustainable way will only be possible with significant changes, not only to our diets, but also to the global agricultural model. The way we produce meat will need to be a key part of this shift, with an emphasis needed towards sustainable, grass-fed or organic meat and an openness to technological alternatives.

As investors, we can support sustainable options, and as individuals we can reduce our meat consumption, focusing on quality over quantity. And if that improves our health as well as the environment, it will indeed be feeding two birds with one scone.