Could 2019 be the year that climate change finally receives the political and public backing necessary for real action? So far, we have seen school children on strike, listened to Greta Thunberg’s compelling words1, watched a BBC documentary, and experienced the protests of a dedicated group of activists, Extinction Rebellion2. 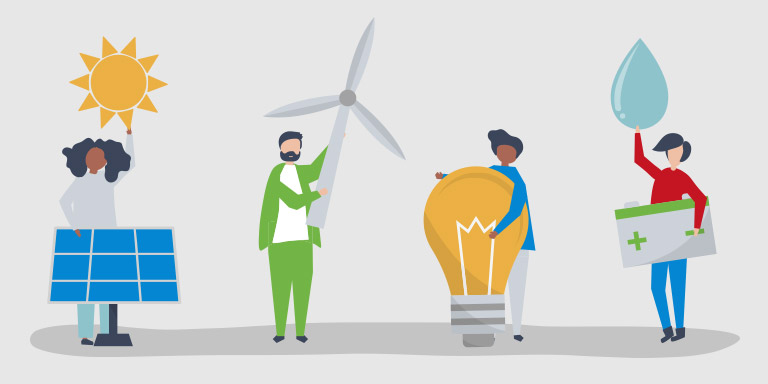 In response, Parliament has declared a climate emergency3 – a far cry from policy changes that have taken us backwards, for example cutting subsidies on home solar panels4. Independent advisors to government, at the Committee on Climate Change (CCC), have advised the reduction of greenhouse gas emissions to net zero by 2050.

Based on current trends, the UK is set to miss existing carbon targets for both 2025 and 20306. We still rely heavily on fossil fuels; in 2016, renewables accounted for just 8.9% of total final UK energy consumption7. However, if this paints a rather gloomy picture, it is worth noting that there has already been significant change.

The renewables sector has grown rapidly in recent decades. There are estimated to be about half a million jobs in the low-carbon economy in the UK, although it is worth noting that the definition of ‘green’ does vary8.

British carbon emissions have fallen, as the economy has shifted away from production and manufacture, towards a more service based approach. At the same time, we depend less on coal, and more on natural gas (which whilst still a fossil fuel, has lower emissions than coal9). In fact, Britain has just experienced its first week of burning no coal since 188210. In 2017, UK emissions were 43% below 1990 levels11.

Nevertheless, these shifts still do not go far enough, and are not happening fast enough. As Sir David Attenborough explained in the BBC programme Climate Change – The Facts, “”It may sound frightening, but the scientific evidence is that if we have not taken dramatic action within the next decade, we could face irreversible damage to the natural world and the collapse of our societies.”12

Scientists warn of the concept of ‘tipping points’13 – the ecological catastrophes that once started will be unstoppable. For example if rainforests begin to die due to temperature increases, then their role as ‘lungs’ will be lost, meaning more carbon in the atmosphere and greater acceleration of climate change. Scientists are uniting in agreement that more radical action is needed.

Alongside improved fuel efficiency, and technologies to capture and store carbon, the CCC states that if we are to achieve the goal of zero net emissions by 2050, a key factor will be tackling our reliance on fossil fuels. With many nuclear power stations facing old age and expensive decommissioning, renewables will need to step up. The CCC explains that we will require a quadrupling of renewable electricity from sources such as wind, tidal and solar power14.

Large scale, offshore wind farms are the most likely source of expansion for the UK. In fact, a new government deal with industry could result in nearly a third of British electricity generated by offshore wind farms by 2030. This will involve investments in robotics, larger turbines and floating wind farms and aims to reduce the cost of wind farms, to enable a subsidy free industry15.

Other low carbon technologies can be used to generate heat, such as ground or air-source heat pumps, which capture heat from the ground or air. These will need to become standard in new build properties – regulation is the best way to achieve this.

Bioenergy is a useful form of renewable energy that looks set to play a larger role in our UK energy mix. When the feedstock, such as maize or wood, is sustainably sourced, or waste from food or agriculture is used, then it has great potential, particularly for heating and electricity generation. Energy efficiency measures, such as insulation, are also critical for helping us lower emissions.

Transport will be an important sector to address. The increased use of biofuels blended with petrol and diesel is one option, and electric is another choice that is becoming widely available and commercially viable – although of course to be sustainable the electricity used needs to be green.

The longer term answer to sustainable vehicles could require a much more drastic overhaul of the whole transport system, to allow hydrogen fuel cell vehicles to gain market traction. This would require financial support from Government.

Yet with the pressure to keep costs down for consumers, fracking for shale gas represents a cost-effective approach in the UK. It is however one that is fraught with difficulty, including opposition from local residents and environmental groups question.

Many people question how much lower carbon it really is (because the greenhouse gas methane can leak in the process) and fear the ecological damage caused by extraction16. In fact, support for fracking has fallen from 28% to 12% since 201317.

Many Holden & Partners’ client portfolios contain a significant amount of exposure to both renewable energy and sustainable transport – particularly within our EST (Ethical, Sustainable and Thematic) investment proposition. For example, renewable infrastructure investments such as The Renewables Infrastructure Group and John Laing Environmental Assets are present within various EST portfolios. These investment companies own and operate renewable energy facilities such as wind, solar and anaerobic digestion, thus contributing to the shift away from the UK’s dependency on fossil fuel. Sustainable transport investments such as those involved in the development of electric vehicles are also widely held across our range of EST funds. Holden & Partners has believed since its inception fifteen years ago that renewable energy and sustainable transport are themes of critical importance when it comes to environmental sustainability. It is worth noting that investments in these areas also offer the potential for markedly positive returns given the magnitude of the issue.

As investors, we can be part of the growth of renewable energy in a phase of exciting opportunity. The timing seems ripe for some bold support of renewables, enabling the UK to make the shift to a zero carbon economy. It requires brave and forward looking leaders to take the plunge and implement the required incentives and regulations.

For the first time in a decade, climate change has risen to near the top of the agenda. The future is looking greener.