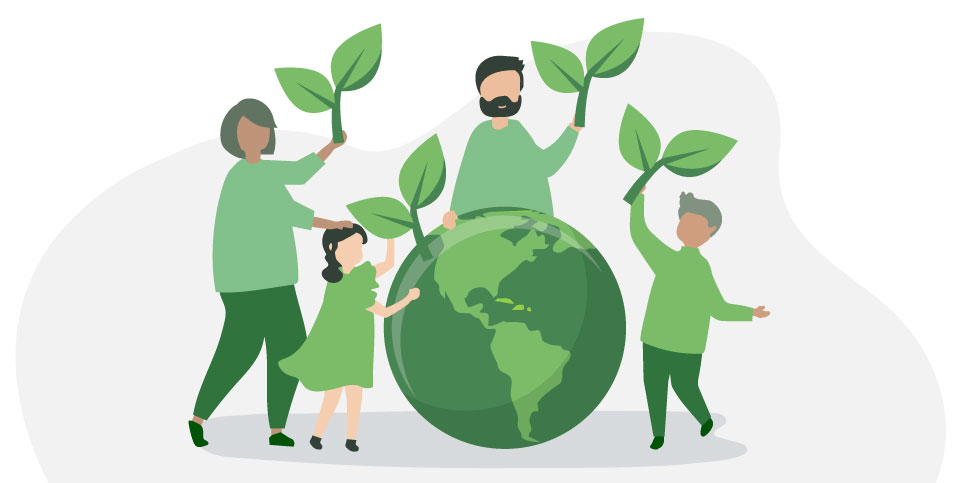 ‘Vegan-curiosity’ has been growing in popularity in recent years, and not just amongst celebrities. Since 2014, going vegan for January, dubbed Veganuary, has led to more than one million people in 192 countries trying veganism1 and there are an estimated 600,000 vegans today in the UK2.

Overall UK sales of vegan foods have risen by 40%, from £582 million in 2014 to an estimated £816 million last year and are expected to be in excess of £1.1 billion by 2024, according to the latest consumer research from analyst firm Mintel3. The findings also highlight that 88% of the population still eats red meat, so for the majority, this is about variety and flexibility rather than strict veganism.

This shift away from animal products has been driven largely by health concerns, as well as animal welfare issues. However, there has also been a rising awareness of the environmental concerns linked to the production of red meat and dairy.

The livestock sector contributes 14.5% of global greenhouse gases, including a high proportion of methane and nitrous oxide4, which are many times more potent than carbon dioxide. An Oxford University led study concluded that a meat-rich diet is responsible for over twice the emissions caused by a plant-based diet, with beef as the most polluting food, globally5.

Red meat production is inefficient on two levels. Firstly, livestock requires on average 3 kg of human-edible material, mostly grains, to produce 1 kg of meat, and secondly, it takes a huge footprint, providing just 18% of calories consumed globally but using over 80% of farmland6. Cattle-farming has also been cited as one of the major drivers of deforestation of tropical rainforests. This leads to biodiversity loss as well as releasing carbon dioxide stored in trees and soil into the atmosphere7.

It is important to note that the figures concerning meat are global and based largely on a mass-production approach. Sustainably managed, grass-fed livestock can bring environmental benefits, even playing a role in the capture and storage of carbon through improvements to soil quality9.

Nevertheless, the spotlight is falling on alternatives to red meat. According to Mintel, the UK market for meat alternatives could be worth more than £1.1billion by 202410. Research released in July last year by trademark law firm, EMW, found the number of trademarks for vegan products more than doubled in 2019, and then particularly soared as demand for vegan options increased during the first lockdown11.

Yet what about synthetic or cultured meat, grown in a laboratory? Recently, the US company Eat Just’s ‘no-kill chicken bites’, cultured in a bioreactor, have just been approved for sale for the first time, having passed a safety review by the Singapore Food Agency12. The current methods of production are small scale and carbon intensive. However, manufacturers hope that scaling up will lead to lower emissions, as well as requiring less water and land than for conventional meat13.

Lab grown meat also removes the need for antibiotics in meat production, which is a leading cause of antimicrobial resistance in humans14. Globally, the food industry is the largest consumer of antibiotics, used to prevent disease or promote growth in otherwise healthy farm animals. Meat may also be entwined with pandemics. From wet markets potentially leading to Covid and chicken rearing being strongly linked to bird flu, human treatment of animals has often had dire consequences15. Lab grown meat comes without these concerns.

Over recent years, Holden & Partners has been aware of the environmental and demographic challenges that have arisen due to global population growth as well as increasing demand for meat products. That’s why related issues such as climate change, water management, nutrition and sustainable agriculture are key themes within our Sustainable portfolios.

We have companies in our portfolios which are engaged in tackling the eco-issues affecting agriculture. For example, Xylem, a provider of water technology with a specialisation in precision irrigation, enables farmers to use water more efficiently. Also, Vitasoy, an 80-year-old, family-owned Hong Kong based company produces meat alternatives, such as soy and tofu, with a strong focus on sustainability. The stock is a holding within the First Sentier Asia Pacific Sustainability Leaders, one of our Asia Pacific equity holdings within our investment strategies.

Feeding a growing population in a sustainable way will only be possible with significant changes, not only to our diets, but also to the global agricultural model. It is likely that it will need to include more plant-based foods, as well as sustainable meat and technological alternatives, to build a healthy, ethical and equitable food supply, beyond January’s resolutions.

6 Shaping the future of livestock (fao.org)

7 The Beef Industry And Deforestation (rainforestpartnership.org)

14 Antibiotic resistance: how drug misuse in livestock farming is a problem for human health (theconversation.com)