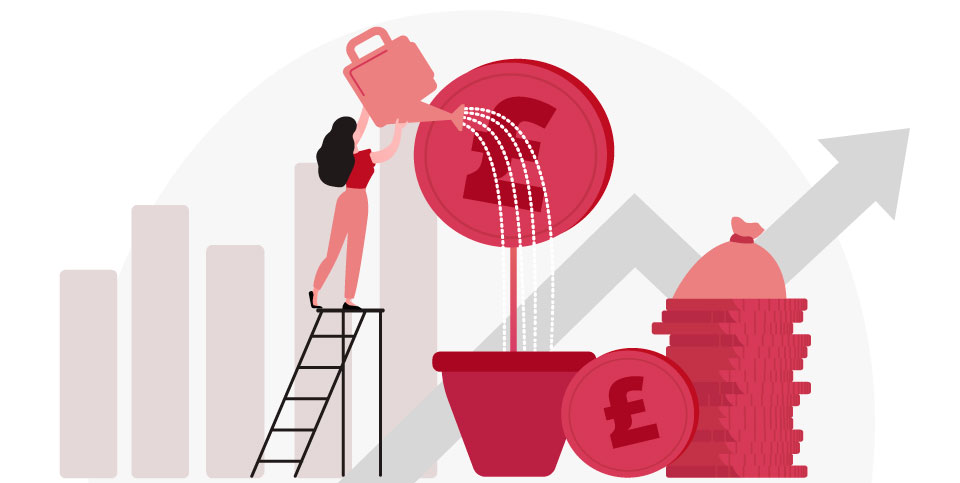 We unpick Modern Monetary Theory to work out if it has the answers to creating a thriving economy.

As governments continue to borrow more to protect and stimulate their economies following the fallout of the pandemic, there is concern. How will we pay it all back? Yet a recent school of thought asks a different question. If a country controls its currency supply, can it ever run out of money?

Who, as a child, asked that simple but oh so complex question, ‘can’t we just print more money?’ In fact, that’s the basic tenet behind Modern Monetary Theory (MMT).

This macroeconomic framework suggests that countries that issue their currencies (such as the UK, US and Japan) and spend, tax and borrow in a currency that they control are not reliant on taxes or borrowing for spending. With a monopoly over issuing currency, they can simply print as much money as they need1.

To many traditional economists, simply printing money, an example of which is quantitative easing (QE), is considered risky as it can lead to inflation. Nevertheless, many central banks having been involved in some form of QE since 2008 with what could be argued as very little impact on inflation2.

MMT theorists argue that money creation on its own cannot be a cause of inflation. Taxation can be used, not to raise money to pay for the borrowing, but instead to extract money from the economy and ‘cool it down’. 3

The history of MMT

The abandonment of ‘the gold standard’ is a pivotal precursor for MMT, dating back to the 1930s in the UK and as late as the 1970s for the US4. This meant currency could no longer be converted to gold or any other commodity at a fixed value. It ushered in the era of ‘fiat currencies’ in the Western developed world, which means the notes in our wallets have no intrinsic value, or use-value, but are made valuable because the government recognises their value.

This is a crucial requirement for MMT, in which additional currency can be created at no cost if the economy is not at full employment. This would not be possible if the currency itself was pegged to the value of a scarce resource like gold.

The roots of MMT can be found in the work of Hyman Minsky and Abba Lerner5 during the 20th century, but the book, Soft Currency Economics II written in 1993 by American economist and hedge fund founder Warren Mosler is said to have launched MMT mainstream. Then, his paper ‘Soft Currency Economics’6 published in 1994, challenged the way we look at budget deficits and national debt, sparking discussions and support for the theory.

Where does MMT fit into economic theory?

To understand MMT, it is important to know where it fits with the two main economic theories, Classical and Keynesian.

Classical economics7 is a school of thought from the late 18th century, after the beginning industrial revolution, which is famous for its adoption of a ‘laissez-faire’ approach. This French phrase translates to ‘let it do’ which in economic terms means no interference in the efficient functioning of the free market. Free markets, left to their own devices, will always allow the forces of demand and supply to revert an economy to its long-run equilibrium or full capacity outcome. Thus, advocates for this theory believe there is no place for government intervention or fiscal policy. Instead, supply-side policies, such as policies to increase free-market efficiency, by reducing taxes or increasing privatisation, should be the only ways to increase economic output8.

On the other hand, economist John Maynard Keynes believed that by adopting a classical approach, short-term changes in an economy are ignored when they should be addressed, famously quoting “in the long run we are all dead”9. His theory was also born in a bid to understand The Great Depression of the 1930s10. It relies on the belief that in a recession, aggregate demand in an economy is low, as many people are unwilling to spend, which prevents an economy from reaching its full capacity. Under this school of thought, government spending or expansionary fiscal policy does stimulate economic activity and can help an economy reach its full capacity. In addition, government spending has the power of the multiplier effect11 so for every £1 spent it creates a greater than £1 increase in national income, another positive for government intervention.

More recently, post-Keynesian theories12 have been said to be closely linked to MMT. Both approaches champion the power of government spending to stimulate an economy to increase its capacity. Equally, just as Keynesian supporters believe inflation can be controlled by a contractionary fiscal policy (cutting spending and/or increasing taxes), the same principle is followed in MMT, with taxation used to control inflation. What makes MMT stand out is its emphasis on currency creation and the consideration of the Treasury, the central bank and the payment system as one entity13. MMT goes futher still, considering a job guarantee approach, providing employment for anyone willing and able to work14.

Overall, MMT differs from Keynesian theories by eliminating the concept of a government deficit, but the implications of their approaches are similar.

The pros and cons of MMT

As with most economic theories, MMT has supporters and critics.

One of the current faces of the theory is the economist Stephanie Kelton. She was Bernie Sanders’ senior economic adviser during his presidential campaigns of 2016 and 2020, with MMT being used to justify proposed government spending programs, such as ‘Medicare for All’ and the ‘Green New Deal’15.

Published in 2020, Kelton’s New York Times bestseller, The Deficit Myth16, develops Mosler’s original idea that governments are not constrained by a budget. She argues that tax revenues do not finance government expenditure, but rather control inflation, influence certain activities, and redistribute wealth. With this mindset, governments can then target full employment, as opposed to a natural rate of unemployment, because the level of government deficit is insignificant and determined by the above.

By contrast, Nobel prize-winning economist, Paul Krugman, disagrees17. As a conventional Keynesian, he is in favour of many of the government spending programs that MMT supports, but refutes the claim that the required size of the budget deficit can be determined by the need to achieve full employment. That is, if monetary policy is available, there are a range of deficits consistent with that goal. This creates a trade-off: would the government spending on employment, welfare, etc with a higher deficit be worth the loss in private investment due to a higher interest rate?

Economist Lawrence Summers, columnist at The Washington Post, sides with Krugman. He describes the ideas as “offering the proverbial free lunch” and “fallacious at multiple levels”18. Summers explains that printing money to cover domestic currency liabilities is not feasible, giving the example of the UK and Italy requiring support from the International Monetary Fund during the mid-1970s.

Meanwhile, Harvard Economics Professor, Kenneth Rogoff describes it as “Modern Monetary Nonsense”19 and suggests it could potentially destabilise the entire global financial system. For countries such as Japan, where most of the debt is held domestically, issuing debt at below-market interest rates is a better option for reducing the debt burden, than for countries such as the US who rely heavily on foreign buyers.

MMT in the real world

Subscribing to MMT would suggest that so long as an economy is not operating at capacity, measured by real resource utilisation such as unemployment, then fiscal stimulus can spur growth, reduce unemployment and fund major social and economic programmes. Over the past year, we have seen government spending soar above revenues, with national debt figures spiralling, counter-balanced by a crisis that would have seen deep and prolonged global recessions and wide-spread industry collapse had the fiscal and monetary floodgates not opened, or rather not been taken to a higher level. But questions remain that once the colossal headwind and deflationary pressures of a global pandemic ebb, will inflation return with a vengeance and who will be left to pay the bill?

Fiscal stimulus packages that can renew crumbling infrastructure, tackle climate change and reduce poverty are being rolled out to support recovering economies, but if countries can operate with higher deficits and maintain stable inflation, why stop? The return of inflation has been heralded for the past decade, but central banks now have more ammunition to fight inflation than perhaps at any point in history, and rates are at rock-bottom.

Maybe today that childish question is more relevant than ever and printing more money is more sensible than it first seems.

5 Functional Finance: A Comparison of the Evolution of the Positions of Hyman Minsky and Abba Lerner | Levy Economics Institute (levyinstitute.org)

16 Kelton, Stephanie. (John Murray, 2020). The Deficit Myth: MMT and How to Build a Better Economy