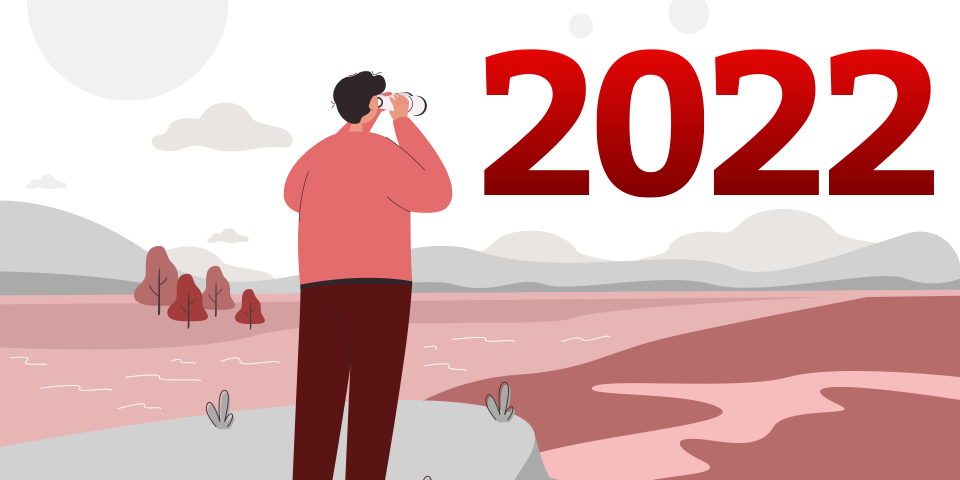 Everything about the current period we are living in is extraordinary, from the pandemic and resulting social changes, to the level of stimulus provided by both Central Banks and governments. It makes it an interesting time for global financial markets. We expect 2022 to be dominated by some key themes that we’ll explore here:

Historically, economists would balk at the thought of allowing inflation to far exceed Central Bank targets in a time of above-trend economic growth. So why the hesitancy to materially raise interest rates?

‘Transitory’ was the inflation term adopted by many policymakers in 2021, after it was used by Federal Reserve chairman Jerome Powell to try and sweep high inflation statistics under the rug, muting their impact on long-term forecasts of asset classes and economic projections.1 The narrative wasn’t wholly unfounded. After all, the pandemic caused unique conditions for a short-term spike in inflation; a low year-on-year base from a time when economies were largely closed, unprecedented demand surging from the reopening and subsequent supply constraints, and extreme levels of stimulus being pumped directly into economies.

However, less than a year after its advent, the term transitory has been retired, and rightly so. One of the greater inflation concerns is that high inflation, even if caused by seemingly transient factors, feeds long-term inflation as it becomes entrenched in expectations, for example workers demand higher pay and businesses demand higher prices.

The Bank of England has taken its first steps, 2 and other major developed Central Banks look set to follow, as we move into a rising interest rate environment. Interest rate paths projected by financial markets are visible in bond markets, however the future holds significant uncertainty. If Central Banks raise rates too steeply and too soon, they risk derailing strengthening economies. On the other hand, if action is taken too late, they could face runaway inflation, rising rates and faltering growth (known as ‘stagflation’). How Central Banks across the world navigate through these extraordinary times will arguably be the most influential factor in determining the risks and rewards experienced across financial markets.

The President for COP 26 closed the conference fighting back tears and apologising,3 serving as a strong indicator that despite the lip service paid by many leaders to net zero emission pledges, we are not doing enough. Much media attention was afforded to major emitters such as the United States, China and India failing to agree to phase out coal development,4 but the low accountability for often vague emission reduction plans diluted even the strongest pledges.

Change driven from the top down has shown to be lacklustre, with governments reluctant to take serious action to reduce the credibility gap between ambition and reality. Yet the negative media reception and public ire that followed the conference gave some hope. Where little accountability exists amongst governments or supranational bodies, it is possible for us as investors, consumers, and voters to force change.

Flows into environmental, social and governance (ESG) assets continued to reach record high figures in 2021, a financial trend underpinned by growing environmental and social awareness that we expect will continue far into the future.5 At Holden & Partners, we refuse to sit on our laurels. As ESG investing pioneers we will continue to search for greater impact and developments in the dynamic market for sustainable assets.

COVID, vaccines and the move into endemic

We are now entering the third year of the pandemic. With the most recent Omicron variant looking as though it causes less severe illness than previous variants the question now is how we return to some sort of ‘normal’. The risk of another dangerous variant remains high, and vaccines have yet to provide the circuit breaker that was originally hoped for, although new drugs are being developed that could provide us with what we need. The general view across the investment community is one of quiet optimism. We expect the stock market to continue to rally this year, however it is unlikely to be with the same vigour as last year.

The hope – and it is still early days – is that COVID is moving into the territory of an endemic virus and something that we learn to live with as opposed to try and eradicate. With the use of vaccines and the creation of new therapeutics, the chances of a return to ‘normality’ are certainly increased.

With the pandemic taking the limelight for the last few years, other key risks have taken a back seat. We believe this lack of attention could lead to markets and investors being unprepared. This year is likely to see the resurgence of geopolitical risk, both in the UK and across the globe.

In the UK, the government faces a huge amount of pressure, with the potential for a leadership bid as Prime Minister Boris Johnson and many of his colleagues’ ability to play by the rules has been called into question.6 With local elections later this year, it is possible that we could see a new Conservative Prime Minister by the end of the year. The risk of inflation also creates challenges for the government as the cost of living is likely to continue to increase over the year, causing trouble for the population.

Globally, there are two areas that we believe require significant attention. The ongoing tensions between China and the US, coupled with the slowdown in the Chinese economy, will likely lead to them looking at competition issues. Another area that we are keeping an eye on is the situation involving Ukraine and Russia. Many believe that Russia’s invasion of Ukraine is imminent.7 The escalation that has been seen at the border means that governments (notably the US and NATO) are on high alert in this region.

It looks like it’s going to be another interesting year… Do not hesitate to get in touch if there is any aspect of your 2022 finances that you would like to discuss.

Please note that any thresholds, allowances, percentage rates and tax legislation stated may change in the future. The content of this post is for your general information and use only; it is not intended to address your particular requirements. This communication should not be deemed to be, or constitute, advice. You should not take any action without having spoken with your usual adviser.