Skip to content
The issue of gender equality in the workplace is a problem which is plaguing companies all over the globe. In this article, we endeavour to identify the root-causes of the issue, to present relevant and factual data, and to examine some potential solutions.Gender equality issues have been garnering an increasing amount of publicity in recent years. Here in the UK, this was very much bolstered by the implementation of the government-mandated requirement for all companies with more than 250 employees to report on their respective gender pay gaps by 4th April 2018. The results of this disclosure exercise were at best disappointing and at worst alarming. For example, of the 10,015 UK companies who met the reporting deadline, 78% revealed that they pay men more than women. Some company-specific examples include accountancy firm Deloitte, who revealed they pay their UK female staff 43.2% less than their male counterparts, HSBC – the UK’s most valuable company by market capitalisation – disclosed that their female employees earned 59% less in 2017, and discount airliner Ryanair reported a gender pay gap figure of 67%.1As noted above, the issue of gender (in)equality does not reside in the UK alone. In fact, data suggests that UK firms score quite highly relative to other developed nations 2, with the US producing a notably poor ranking – more on this to come.

When presented with the data surrounding the issue, it is important to address the more existential question of whether less women are entering the workplace in the first place, leading to a natural disparity between male and female employees. According to Jo Andrews of Equileap, this is in fact not the case. For example, the level of female graduates entering the workplace is not significantly dissimilar to that of men in the developed world. Focussing on the UK, figures show that women are more than one-third more likely to attend university than men and that in 2017, 30,000 more women had been accepted into university programmes.3 Data from selected European nations paints a similar picture. In Sweden, Spain, Germany and France, the majority of university graduates are female.4 This same data however points to the discouraging fact that this high proportion of female university graduates does not translate into a commensurate number of women in senior management positions. This, of course, begs the question as to why. 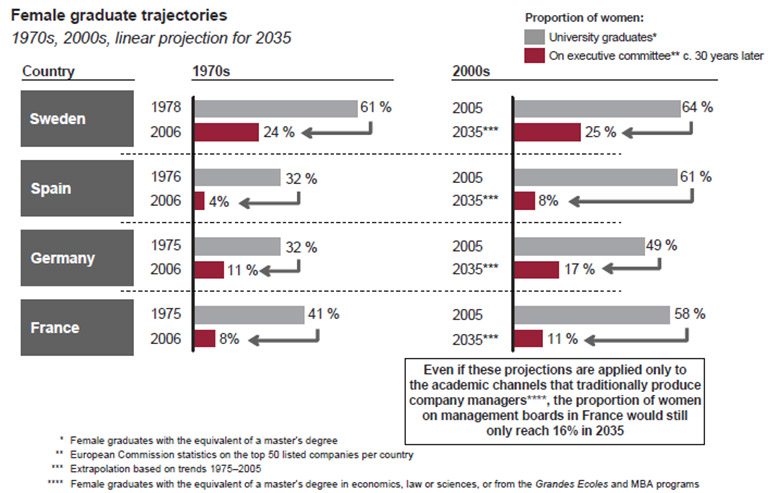 The consensus according to a plethora of studies, surveys and analysis points to one primary cause being accountable for the disparity: the fact that women are still expected, and indeed still do, sacrifice career ambitions to care for their families in numbers that far outstrip that of men. This phenomenon will likely not come as any great surprise, nor will the fact that this is the case globally – though significant differences do exist between countries. For example, a Harvard Business Review survey 5 showed that the primary reason US women tend to leave the workplace was to care for their families, with 44% of female respondents choosing this answer. The equivalent male figure is a mere 12%. On a related note, a 2013 study by the Pew Research Centre 6 aimed at millennials showed a striking difference in the perception of the degree to which becoming a parent would hinder their career progress with 19% of men claiming parenthood could be detrimental to their careers compared to a markedly higher 59% of women.

Workplace absences, due to family concerns, form only one aspect of the overall issue. However, this factor is not to be underestimated. Turning again to the first chart presented in this article, on a regional basis, European countries fare very well in terms of the percentage of companies within these nations who are included in Equileap’s Top 200 list for gender equality, with Scandinavian countries scoring particularly well. By comparison however, only 2% of American firms have made the list. Interestingly, it could be argued that a correlation exists between corporate gender equality and the duration of paid parental leave required by national law. The underlying logic being that countries who support rather than penalise women for taking time off to care for their families will see a greater number of women remain in the workplace – which leads to greater gender diversity within corporate bodies. A somewhat alarming fact is that the United States does not have a legally-mandated maternity leave policy. 7 Conversely, Norway, with 58% of its eligible firms making the Equileap Top 200, offers women 46 weeks of maternity leave at 100% of their salary, or 56 weeks at 80%. 8 Norway also boasts a highly progressive paternity leave policy, with a ten-week quota being reserved for men during the overall period of parental leave. This has seen 90% of Norwegian men taking at least 12 weeks of paternity leave (a two-week period is granted to both parents following the birth of a child). This has helped to produce greater household equality in the country and helps to avoid women bearing the sold burden of responsibility for childcare. 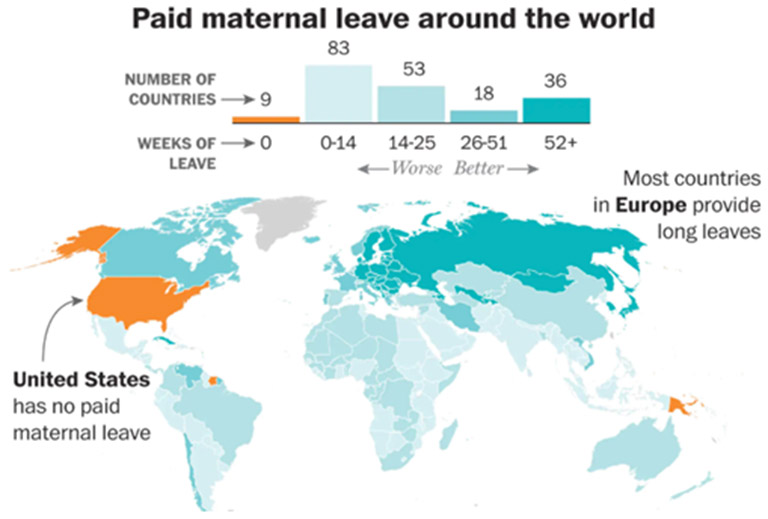 A further question we wished to investigate, and one which is very much relevant to our role as investment managers, is whether companies with greater gender equality tend to perform better than those with a more homogenously-male workforce. According to a number of studies, greater diversity does appear to boost corporate performance. One study published in the Journal of Managerial Finance found that US companies with a higher proportion of women on the board of directors contributed to lower levels of volatility in stock market return. 9 A McKinsey survey also found that companies with higher female representation in top management functions scored more highly on nine key organisational metrics. 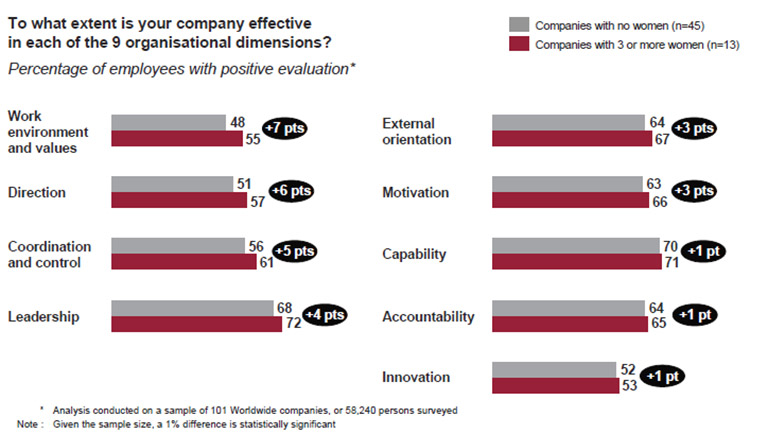 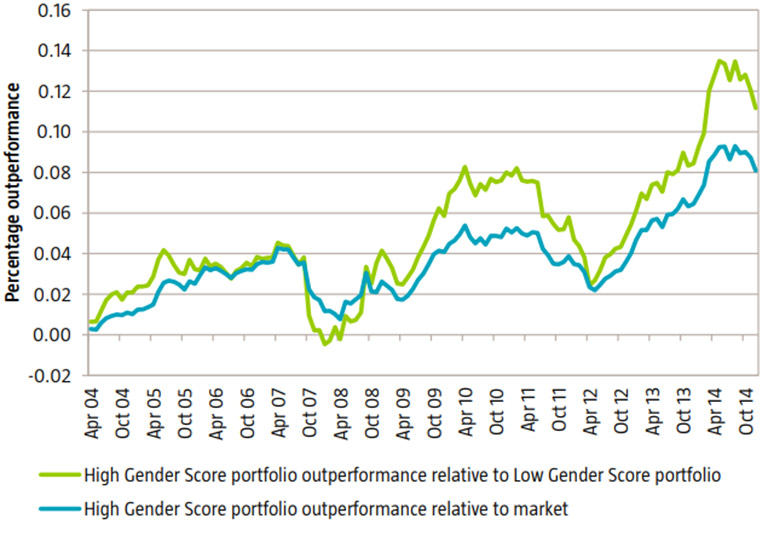 A final point of investigation we pursued was to examine potential solutions to the problem. We offer some of the more compelling conclusions from our findings below.

At Holden and Partners, we are encouraged by the fact that gender equality disparities have improved over recent years, and quite substantially over past decades. However, we also recognise that much work remains to be done. Applying this ethos to our Ethical, Sustainable and Thematic (EST) investment proposition, it is also encouraging to note that many of the fund managers represented within our EST portfolios are focussed on issues such as gender equality and diversity when it comes to the sustainability element of their respective investment selection processes.