“Events, dear boy, events”
– Prime Minister Harold MacMillan’s response to the question ‘What does the leader of a country fear most’

Two years on from the referendum vote confirming Britain’s decision to leave the European Union, the threat of a negative Brexit outcome continues to cause significant uncertainty for the UK economy. Perhaps more pertinently, how, not when, Britain exits the EU is casting doubt into the minds of investors.

Brexit does not differ from other potentially significant market developments in that investors need to evaluate the risks and opportunities it presents. It is therefore important to identify the potential consequences of a ‘No Deal’ Brexit, as well as how a deal may be struck, and the impact of each of these scenarios on the UK economy.

If a proposed Brexit resolution is rejected by Parliament or the European Council, the UK would be forced to leave under a ‘No Deal’ scenario, meaning both sides would have to shoulder potentially disruptive economic and political effects.

The ramifications of this outcome may be severe, potentially resulting in an abrupt, negative shift in UK/EU relations. In terms of trade, the EU may view the UK as a country with which it has no bilateral trade agreements, applying tariffs and customs controls. Delays at borders and ports could also slow the delivery of goods.

In addition, the services-orientated nature of the UK economy – services, rather than goods, comprise an estimated 80% of UK GDP 1 – means that the financial sector stands to be particularly hard-hit. Passporting rights, which allow financial service firms to operate within the bloc without having to apply for authorisation, could be lost. The same goes for professions such as accounting, advertising, law, and engineering, all of which could struggle if access to the European market is restricted.

In an investment context, the absence of a deal would likely result in an increase in ‘risk off’ sentiment, particularly with regards to the UK market. UK sovereign bonds (both conventional Gilts and Index Linked Gilts) would benefit from increased risk-aversion and a ‘flight to quality’, whereby investors sell assets they perceive to be risky and replace them with safer alternatives that are more likely to protect capital during periods of turbulence. The increase in demand for government bonds, and lower anticipated economic growth, would anchor interest rates at their current low levels and increase inflation expectations, further supporting the investment case for these types of defensive assets.

That said, a ‘No Deal’ scenario is not all bad news for globally-diversified equity investors. The most immediate effect of a breakdown in negotiations would be a sharp and pronounced weakening of Sterling, thereby increasing the GBP value of assets denominated in other global currencies. Although many global and emerging market equity funds are held in Sterling-denominated share classes, the underlying holdings are typically denominated in a variety of foreign currencies and will therefore increase in value with a further devaluation of the pound (i.e. a fall in the pound increases the value of a dollar/euro/yen-denominated share). The same can be said for listed infrastructure, commodity, and property assets with overseas exposure.

In a similar vein, many large UK-listed firms derive a significant percentage of their revenues from overseas earnings, meaning that they, too, may benefit from Sterling weakness and are not reliant solely on UK growth to generate profits (due to the increasing value of their foreign cashflows when they are converted back to Pounds). In fact, most FTSE 100 earnings come from overseas with only 28.9% of revenue currently generated in the UK.

Conversely, it could be said that mid and small-sized UK companies are more vulnerable to a ‘No Deal’ scenario than their larger counterparts due to their predominantly domestic revenue streams, and greater reliance on imported inputs. This is true, but a decline in the Pound can also serve to attract foreign investment and trigger an increase in merger and acquisition (M&A) activity, as foreign buyers are drawn to UK assets due to the cost savings provided by a weaker Sterling. A recent Ernst & Young report stated that the UK recently saw its strongest quarter of M&A activity in a decade 2, with Q1 2018 witnessing twice the amount of M&A as Q4 2017, including many household names such as Sky and Asda featuring as targets 3. This suggests a quiet confidence in attractive UK businesses which may be trading at a discount due to Brexit uncertainty.

Both sides wish to avoid a ‘No Deal’ scenario and negotiations remain ongoing. This poses many unanswered questions for investors, although anticipating Brexit’s full impact is a difficult task.

Essentially, the government must decide between prioritising an ongoing relationship with the EU, or seeking improved trade terms with other nations, in the hope that this will compensate for the reduced access to the European market. Time, unfortunately, is not on the Government’s side. Despite claims from the Cabinet that 80% of the withdrawal agreement has already been settled 4, UK businesses and EU stakeholders, as well as the Government itself, are still preparing for a ‘No Deal’ possibility.

In any event, it is likely that the UK will have to be prepared to make concessions to maintain access to the single market. It may not be politically popular but regulatory agreement and common standards are often fundamental to a successful trading relationship. In the UK’s favour is its services trade surplus of £88bn which means that British services are in demand overseas, both in Europe and further afield, and this demand will not cease overnight. The potential to create or expand existing trade deals outside the EU may soften the blow to the UK economy, and the EU is not immune to the risk of disruption should UK trade ties be lost. It therefore seems likely that an agreement on this issue will be reached.

A more significant point of contention is that of immigration control, with the EU wishing to secure freedom of movement throughout the continent. This issue could prove to be the sticking point that hinders progress on negotiations regarding free trade, although divisions of opinion exist on both an inter and intra-party basis. A major challenge faced by the UK Government is to come up with a solution to appease both ‘Leavers’ and ‘Remainers’. The graph below shows the stance of EU member states, excluding the UK, on four Brexit issues that may prove critical to the success of the negotiations.

An upshot of prolonged Brexit uncertainty is greater stock market volatility and an increase in negative sentiment which has resulted in UK equities becoming an unloved asset class in recent years. Economists have struggled to quantify the impact of Brexit on UK economic activity, which has meant that corporate investment decisions are regularly delayed until businesses can better assess the likely post-Brexit environment. The same can be said of households, as individuals delay spending decisions due to worries about job security and potential inflation.

In this respect, simply some clarity on the potential outcome, whether it be a ‘hard’ or ‘soft’ Brexit scenario, may prove beneficial for markets and investor sentiment. Crucially, at Holden & Partners, we do not believe Brexit uncertainty is a reason for disinvestment. Further volatility should be anticipated as markets digest the likely outcome of negotiations, and there is no doubt that the implications of any agreement will be complex, but scenarios such as these can provide ample opportunities for active investment managers. By selling out of holdings, investors lose the ability to benefit from Brexit-related discounts on assets that are supported by strong fundamentals, or the favourable effect of a weak Pound on global shares. Income from dividends and interest will also be lost. These missed opportunities can compound over time to constrain portfolio performance, preventing investors from achieving their long-term financial goals. There is then the difficult question of when the right time is to re-enter the market.

Above all, we remain disciplined in the application of our investment process and continue to believe that diversification, through investment in a wide range of asset classes, is the best approach to ensure portfolio resilience and guide investors through periods of uncertainty. Consequently, the incorporation of global equities, fixed income including index linked bonds, infrastructure and defensive asset classes in any portfolio, in our opinion, is crucial in these volatile times.

We offer the below charts in an effort to provide our clients with some contextual evidence of the Holden & Partners’ model portfolio investment performance since the EU referendum vote in June 2016. The graphs show that performance has been positive since this date, and, counter to consensus estimates, financial assets produced strong returns in the months following the result. 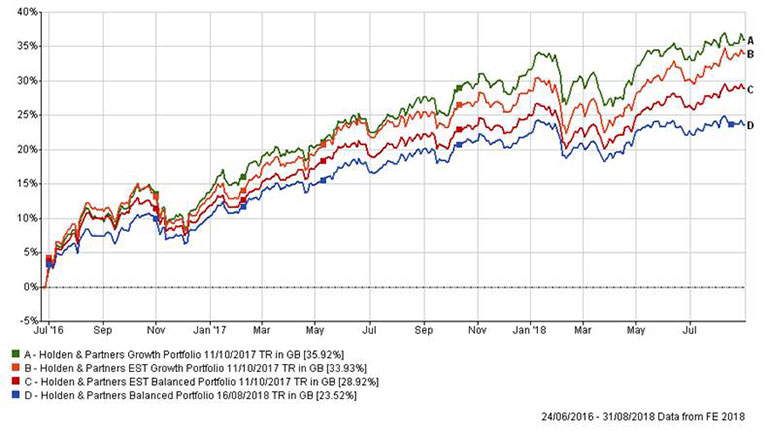 We would also reiterate a message articulated to clients in our most recent newsletter which serves to highlight the value of remaining constantly invested over the longer term. The below chart representing a hypothetical investment of £10,000 into the FTSE All Share Index between 1996 and 2016 with dividends reinvested along the way:

The grey column represents the constantly-invested individual, who achieved an end value of £42,500. The proceeding blue columns represent individuals who, as a result of disinvestment, missed the best 10, 30 and 50 days of index performance respectively. Even the investor who ‘only’ missed the 10 best days was 50% worse off than he or she who remained invested throughout the entire 20-year period.i)

i) Content in this article is for general information and use only, and it is not intended to address your particular requirements. It should not be relied upon in its entirety and shall not be deemed to be, on constitute advice. Information may not be accurate as of the date it is received and may not continue to be accurate in the future. No individual or company should act upon such information without receiving appropriate professional advice after a thorough examination of their situation. We cannot accept responsibility for any loss as a result of acts or omissions taken in respect of this article.

Please remember past performance is not a reliable indicator of future returns. Different types of investment involve varying degrees of risk, and there can be no guarantees that the future performance of any of these investments will be profitable or equal any corresponding historical performance level(s) mentioned in this article.