The volatility that permeated global markets during the first quarter of 2018 led many investors to fear that the nine-year equity bull market may be coming to an end. The subsequent return to index record highs allayed those concerns to some extent, although global markets continue to be characterised by greater fluctuations and uncertainty than investors had come to expect in previous years. In the first 6 months of 2018, the S&P 500 moved by more than 1% on 36 trading days, over four times the amount witnessed in the entire year during 2017 (eight days, to be exact).1 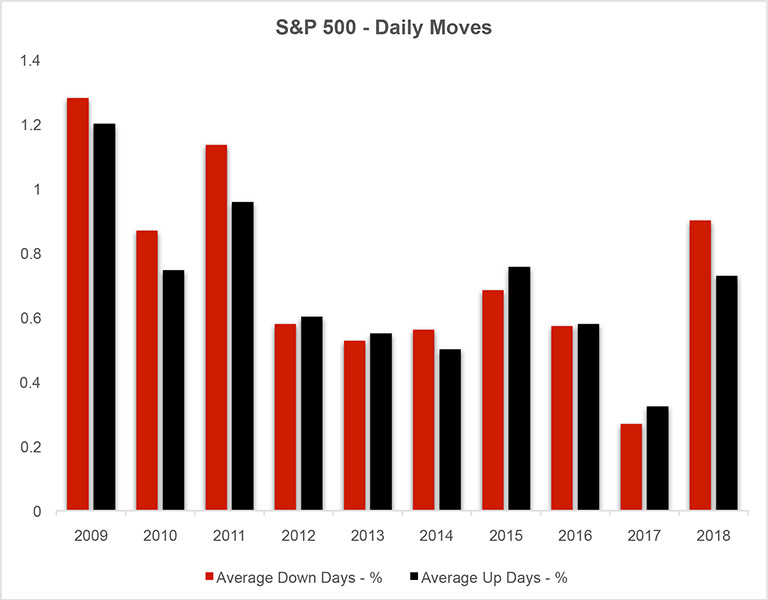 This is the ‘new normal’. It is not to say that the macroeconomic backdrop is no longer supportive of equity markets – in fact, it continues to favour a significant allocation to them. Global growth and corporate earnings remain in expansion, and a severe inflation or interest rate shock seems relatively unlikely at present, meaning that risk assets should continue to generate returns in the short to medium-term. It is simply that, as the business cycle matures, and the global economy moves closer to the slowdown phase, markets become more unforgiving. There will be ‘winners’, but also ‘losers’, and the disparity between the parts of the market delivering and disappointing on expectations will become stark. This effect has become particularly acute over the last quarter, where the health of the US economy has seen it outperform dramatically versus other global stockmarkets.

The outlook is further complicated by valuation; full valuations in themselves do not dictate that a bull market will end, or that stocks will fall, but they do mean that prices may drop from a higher level when markets start to experience stress, thereby exacerbating losses. Complacency may get expensive. In a more nuanced environment, which is likely to be focused on fundamentals, we, at Holden & Partners, advocate investment in areas which can deliver strong underlying growth and identify opportunities and risks that may be underappreciated by the market.

Ultimately, we believe that investors should be prepared for any eventuality and continue to position our portfolios accordingly; we do not attempt to second-guess the timing of the next global recession but seek to increase the resilience of portfolios against market downturns. Our asset allocations therefore remain globally-diversified, with an emphasis on areas experiencing sustainable, and structural, growth.

2018 has been characterised both by greater volatility and a continuation of the US momentum-led growth rally that was prevalent in 2017. These movements reflect two broader market trends: one being that global growth is becoming increasingly uneven and geopolitical risks increasingly widespread, leading to greater uncertainty over the possible macroeconomic outlook, and the other that corporate earnings remain strong in an environment where US growth and fiscal stimulus is sustaining a global economic expansion.

The upshot of these developments is that US equities have been the stand-out performers of the year and a high concentration in this area would have facilitated portfolio outperformance versus that of the wider market, particularly when combined with a heavy allocation to momentum stocks (those exhibiting upward price trends), or quality companies with high profitability/cash flow generation which may be able to withstand greater market volatility.

Our relative underweight to the US market has therefore been a ‘drag’ on performance year-to-date. This underweight is not due to the fact that we possess a negative view on the US economy, far from it. It is simply that we remain cognisant of the risks faced by investors and the deteriorating impact this may have on sentiment.

We recognise that, currently, the overall growth picture is still very favourable as US corporate tax cuts enhance earnings momentum and support above-trend growth in the developed (G7) economies as a whole – a trend that may continue for a year or more, particularly if wage inflation remains relatively contained. Nevertheless, we are aware that a high level of fiscal stimulus at a late stage in the economic cycle can be hazardous. On the upside, it can encourage business investment which, in turn, boosts growth, but it may also cause the economy to ‘overheat’ and spur greater inflationary pressure, forcing the Federal Reserve to accelerate the pace of interest rate rises, constraining growth and bringing forward the end of the business cycle. This alternative outcome is perhaps more likely given the tightness of the US labour market and would have severe ramifications for markets.

In addition, any further escalation in trade tensions or geopolitical risk would undermine business confidence, requiring investors to demand a higher premium to hold riskier assets. We have already seen this trend start to play out as markets adjust to higher levels of uncertainty in the economic environment and expect it to continue for the remainder of the year, although earnings and dividend growth should provide some fundamental support to equity markets. In essence, the macroeconomic environment continues to favour a ‘risk on’ stance, albeit with cautious recognition that risks to the downside have increased.

Whether the disparity between the performance of the US market and that of other regions can be sustained is another question, particularly given the valuation disconnect that has emerged. In the developed world, European equities have lost the momentum they benefitted from in 2017, as political risk once again reared its head and Italian bond yields rose to their highest levels since 2013. These movements belie the fact that Europe continues to benefit from a benign interest rate environment, and that the European Central Bank is likely to extend its support for markets into the foreseeable future. Such regions therefore represent considerable value when the impact of these tailwinds on prices are considered. 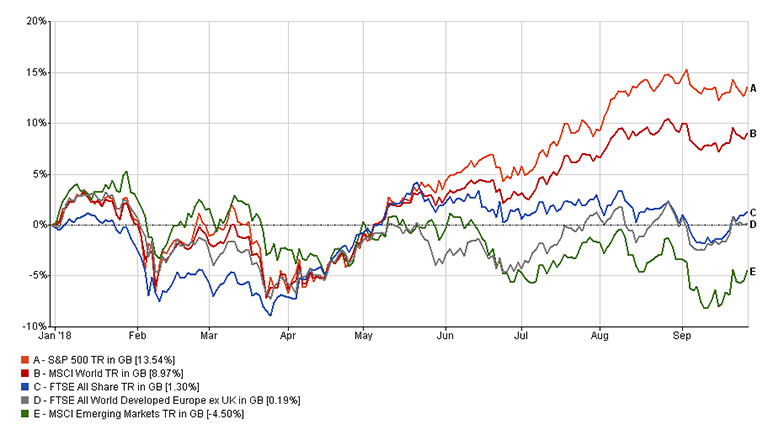 At home, UK equities continue to suffer from prolonged Brexit uncertainty and an increase in negative sentiment which has resulted in them becoming an unloved asset class in recent years. This effect has now been exacerbated to the extent that the disparity between the high dividend yield provided by the equity market (a reflection of lacklustre share prices), and the low income received from Gilts has reached an all-time high.

As we explained in our recent Brexit commentary, we do not believe that the noise surrounding Britain’s exit from the EU is reason to hold-off investing in the UK market completely. Whilst the uncertainty creates an element of volatility that may be delaying business investment in some areas, UK businesses can continue to thrive under either outcome: deal or ‘no deal’. The overseas earners will continue to benefit from Sterling weakness in the event of a ‘hard’ Brexit, whilst the undervalued domestically-orientated businesses present considerable opportunities for the contrarian investor, particularly when the most attractive, market-leading companies represent potential M&A targets for overseas buyers.
In addition, a continuation of the ‘lower for longer’ interest rate environment will provide a favourable backdrop for equity performance, particularly from such a low base. The BoE recently raised rates to 0.75%, the highest level in almost a decade, but any further rises seem unlikely due to a lack of sustained inflationary pressure and relatively fragile economic growth, given the economic uncertainty surrounding the Brexit negotiations.

The performance of GEM equities lagged the global market both due to trade tensions, and the strength of the US Dollar which negatively impacted the currencies of countries with large external deficits, dependent on borrowing in hard ($) currency. That being said, we believe that the impact of bearish sentiment has been more wide-reaching than expected, with economies with more favourable external balance profiles (India/Indonesia etc.) being forced to hike interest rates to stem capital flows out of the country.

Despite this, our view is that, in aggregate, EM growth will remain strong and is supported by economic reform, improving corporate fundamentals, and reasonable valuations, with systemic risks seemingly contained to certain areas. Stronger current account positions in many areas reduce vulnerability to capital flight.

There may be further volatility in the very near-term which is something we remain aware of, although we do not expect relative Dollar strength to persist indefinitely, particularly as a shallower trajectory of interest rate rises should provide a natural ceiling for the currency. Nevertheless, the currency crisis in Turkey highlights the risks of dependence on external funding, and displays the merits of a selective approach with regard to emerging market exposure.

Whilst it is true that ultra-low interest rates and the monetary tightening cycle diminish the risk-dampening role of traditional fixed income assets, we continue to believe that they constitute an important part of a diversified portfolio and can provide an element of portfolio insurance in the event of a market shock.

Much of the fear around higher interest rates, and the implication for bond prices, stems from the US which is at a later stage in its economic cycle where inflationary pressures are more likely to emerge Other parts of the world are further behind in the tightening process; the UK is expected to normalise policy at a much slower rate, and the ECB is still easing, with QE only expected to end this year. This is an environment of lower real equilibrium rates and global returns than of previous cycles, and it is for these reasons that we believe that a sharp increase in inflation on a global scale, and the corresponding spike in yields that would ensue, is unlikely and need not cause long-term, globally-diversified investors alarm.

Currently, our exposure to fixed interest is achieved through a range of complementary funds with a strategic, unconstrained approach so duration and credit risks can be actively managed, ensuring that, particularly in the more high-risk areas of the market, the prevailing yield is sufficient to offset any losses in capital that accrue from further increases in rates. Where possible, we favour less interest rate sensitive areas of the market, including Emerging Market Debt where high yields provide an adequate risk-reward trade-off, and currencies significant value, despite recent volatility.

Property and infrastructure assets continue to be key components of the lower risk and income-orientated portfolios due to their yield superiority over traditional fixed income, and diversification characteristics which ensure a low correlation to both equity and bond markets.